Just added to your cart

You may think that you know what fire department volunteers would do if your barn were to catch fire, but do you really? How would they react if no one were available to answer the question, What is stored in the barn?

Who are the people who respond following a tornado? How would your local police react if you suspected someone were stealing your anhydrous ammonia to make the illegal drug methamphetamine? Are essential farm assets secured against vandalism and theft? Do law enforcement officials know what “hot” marketable assets such as farm tools and chemicals are located on your farm? 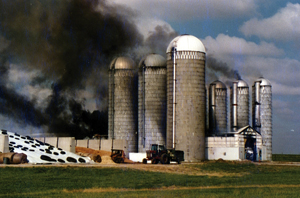 How would enforcement officials or your insurance company react if protesters were to turn off the electricity to your animal production facility or trample your bioengineered crops? How would various phases of government react if a terrorist were to release mycotoxins into your grain bins, and what would happen if you were to unknowingly ship some of the contaminated grain? What would happen to your livestock operation if a quarantine were initiated to curb a disease outbreak? These questions are linked by the necessity for accessible information to help responders react to an emergency in progress—an emergency on your farm. Is your farm secure? And is your family secure in knowing that you've taken every precaution to guard their safety?

As you read the following emergency scenario, think about what you can do to reduce the impact that an emergency on your farm might pose to your personal safety, your livelihood, and your community. Ask questions to identify what can be done in advance to limit your loss potential and to assist responders in coming to your aid.

A motorist traveling down the road late one evening notices smoke coming from somewhere behind a farmhouse. She immediately calls 911 on her cell phone to report the fire. She looks for a number on the mailbox, but seemingly there is none. She does her best to describe the location, citing as a landmark a silo that she just passed. 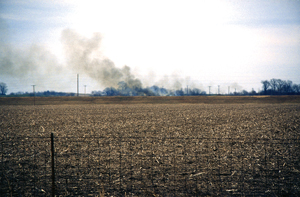 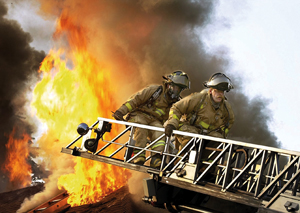 The 911 operator quickly dispatches emergency crews to the general location. They see dense smoke on the horizon, but they take the wrong road. They finally find the right road but have trouble finding the right farm lane. They slow down, trying to read each mailbox, and soon realize that they have passed the lane. Driving back, they locate the mailbox. The address is displayed on only one side, which is why they missed it the first time, and it is faded and only partially legible. Driving down the farm lane and up a small hill, they see one side of the barn engulfed in flames. Responders rush to the house to awaken the inhabitants, but no one is home.

The plan to control the fire is formulated on the spot by the incident commander, who decides to pour water on it and prevent burning ashes from igniting the farmhouse and other buildings nearby. In the time it takes the crew to move into place, the fire spreads to nearly half of the barn. The commander reminds everyone to proceed with caution, to wear their air tanks, and to stay upwind because the smoke may contain pesticides and other chemicals.

The good news: The rest of the farmstead was saved, with no one hurt nor livestock killed. The barn was partially saved, and much of the machinery went undamaged.

The bad news: The water used to fight the fire combined with chemicals stored in the barn to form runoff that contaminated a nearby creek, resulting in dead fish downstream. To make matters worse, the farmer's insurance agent informed him that his policy contained a pollution exclusion clause; that is, while it covered the damaged barn itself, it contained no provision for remediation of the soil and the creek. Think about what caused the responders' delayed arrival, their questionable decision to put